Last year was the centenary of the founding of Lyceum by 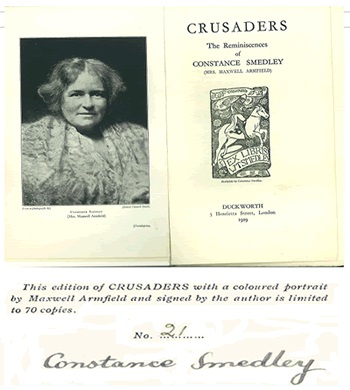 Constance Smedley and I spoke to you then about those early days of international Lyceum. Today I shall tell you something about the early days of our Brisbane Lyceum Club.

What we do know from some notes written some years ago by Miss May Paten is that it was as early as May 1914 that a small group of women met to discuss the possibility of forming a Lyceum Club, and a letter was sent to the London Lyceum Club requesting information. The reply stated that 50 members were required to form a club. Some of the women became international members of the London Lyceum Club including Miss Margaret Ogg who acted as chairman of the group and Miss May Paten, a writer, as secretary.

Others in the group were Miss Martha Burns a dentist, Mrs Young the social editor of the “Courier”, Mrs Dearden, Mrs Brockhurst and Gertrude Ryder who were writers, Winifred Hill an artist and Mrs Coulson-Blair a composer.

The group met on and off in Mrs Young’s office or in the waiting room of Miss Burns dental surgery in Edward Street. It was difficult for them to reach the required number of 50 members especially with World War I intervening.

However, by 1919, they felt that there was sufficient interest to go ahead. They placed a notice in the Brisbane Courier of Wednesday 30 April 1919 inviting interested women to attend a meeting of Brisbane members of the London Lyceum Club at the Brisbane Women’s Club on Friday 2 May at 8.00 pm. The notice gave information about Lyceum.

The Brisbane Women’s Club at that time was in the Courier Building at the corner of Edward and Queen Streets, now the Commonwealth Bank.

The Women’s World section of the Brisbane Courier of Saturday 3 May 1919 reported the meeting thus:

“In response to the invitation issued by the international members of the London Lyceum Club a gathering of women was held in the Brisbane Women’s Club rooms last evening representing university graduates and the teaching, journalistic, medical, dental and legal professions. Miss Margaret A Ogg, who presided, explained the object of the meeting viz: to form a Queensland Branch of the London Lyceum Club.”

The report included details of Lyceum and some of the discussion. Miss Martha Burns LDQ gave an account of her visit to London Lyceum. Miss Freda Bage MSc gave an interesting account of the Melbourne Branch. “Brisbane”, she said, “was too small to have many clubs and a Queensland branch of the Lyceum would be a common meeting ground of University women and women outside who were interested in the same questions”. Misses Brydon, Smith BA and Moore expressed the opinion that it was desirable to form a branch and questions regarding eligibility were asked and answered.

That first committee really set to work and, on Saturday 24 May ie, 3 weeks later, they moved into their new room in the Metropolitan Building at the corner of Adelaide and Albert Streets. It is where the Commonwealth Bank now is situated and the official address was 385 Adelaide Street. May Paten wrote about that first room as follows:

“It was just a room, no facilities, no lift, no beauty whatever, but the Committee turned itself into a working bee to make it as comfortable as possible. Furnishings were, by necessity, strictly utilitarian, and included a choice assortment of butter boxes. The kitchenette was a yard or so of (a) corner with a gas ring, and a modest curtain. Crockery was donated (mostly) likewise foodstuffs. We had a home. The Brisbane Lyceum Club made its bow. Maybe we all had slightly swollen heads as we juggled the butter boxes, and partook of refreshments. We had a home.”

Betty Fletcher wrote later: “The room was up a steep staircase and early members recall carrying up all sorts of gifts of furniture, china etc for their new home. They stained the floor themselves, made furnishings and took turns at providing cakes and biscuits for supper after meetings. Miss Paten always brought a “billy can” of milk from the Paten’s cows at Walton Bridge. Meetings were at night only, and evening dress was worn.”

A report of the Brisbane Lyceum Club and its move to the Metropolitan Building was in the Brisbane Courier of Monday 26 May 1919 and stated that the secretary, Miss Paten, had received membership applications from about 50 women. Miss Martha Burns, the dentist, presided at the first meeting as Miss Ogg was visiting Rockhampton. The annual subscription was set at 10 shillings with an entrance fee of the same amount. The room was available for use by members at any time. They decided to meet on the first Monday of the month which, as you know, we still do.

The Club appears to have remained at 385 Adelaide Street until 1922. At some time during late 1922 or early 1923, it moved to Bible House at 108 George Street which was where the present Executive Building now stands. It was there that the Club obtained a telephone, the number being Central 5944. It was listed in both the September 1923 and the March 1924 issues of the Brisbane Telephone Directory. There were four telephone exchanges in Brisbane at that time: Central, Toowong, Albion and Sandgate.

A problem with the George Street rooms was the high rent, and the Club experienced financial difficulties. Loans were made to the Club by some members. However, the Club already had an active Art Circle, a Music Circle and a small library.

After two years at George Street, the Club moved to Level 5 of Albert House in Albert Street but had no telephone there. Albert House was later demolished to make room for King George Square. Little is known about the time at Albert House or exactly how long the Club was there, but by April 1927 their fourth move had occurred, this time to 257 Edward Street which is where Rothwells Chambers used to be. The Club again had a telephone, the number being Central 7892.

Location number 5 came in 1930 when the Club moved to 272 Queen Street opposite the General Post Office where Post Office Square now stands. The building was variously known as the Truth Building, the Courier Building, and the ACA (Australasian Catholic Assurance) Building.

The Club occupied Rooms 8 and 9 on level 2, and the telephone number was B9441. They were happy days for the members. The Club was settled at last, became more prosperous, and employed a part time attendant, Mrs Durbridge, who looked after the cleaning, the suppers and generally was responsible for keeping the rooms in order. This was quite a remarkable achievement for those days especially when you consider that it was in the time of the Great Depression.

In those early times the meetings were held at 8.00pm, evening dress was always worn and continued to be worn for many years and certainly up to the mid 1950’s. The President’s chair was made in 1936 by a then well known furniture maker, Mr Gordon. Mrs Eva Robson was president at the time and the chair was in memory of Mrs Mary Munro who had preceded Mrs Robson as president. That chair, which you would all know, was only ever used by the president until some 15 or so years ago.

A puzzle regarding location that I have not been able to solve is that, in 1935 the Post Office Directory lists the Club as being at both 272 Queen Street and 237 Edward Street, but the telephone is listed only at Queen Street. The previous Edward Street address from 1927 to 1929 was number 257 not 237. I am inclined to think that it is a mistake in the Post Office Directory, but this would be strange as entries had to be on special forms and paid for.

The remaining locations of the Club are all known and include Archibald House at 21 Adelaide Street (opposite the City Hall at the George Street end and where Penfolds Stationery is now), Norwich House at 127–141 Eagle Street (where the Pig n Whistle Cafe is), and 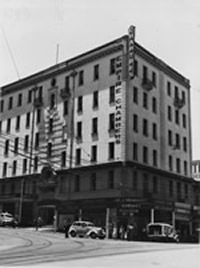 Empire House at the corner of Queen and Wharf Streets above where the former Delahunty’s Pharmacy used to be. The official address was 1 Wharf Street and it is where the Club was located when I joined in 1984. By far the longest time at any location was that at 272 Queen Street opposite the GPO, the Club having been there for 35 years from 1930 to 1965.

That location was known by many people and the Club used to supplement its income by allowing various groups to meet in the rooms in return for a small fee. One such group was the Barjai Group that included Thea Astley and Judith Wright among its speakers. Other groups were the Women Graduates Association, Alliance Francais and the National Council of Women. You may be interested to know that our present rooms on level 21 of 141 Queen Street are location number 12.

In conclusion I would just like to say that I think it would be a wonderful achievement if we could find the names not only of all of the presidents, but also all of the office-bearers during our 86 years.

I wish the Lyceum Club Brisbane Incorporated congratulations on its 86th Anniversary and very many happy returns of the day.